I want to tell you about the testing process of Parallels Cloud Server, one of the products of Parallels Inc., where I’ve been working since 2005. I think the majority of our readers are familiar with the product, mentioned in such articles as Parallels рассекретила Cloud Server, FastVPS: как мы меняли платформы виртуализации and Собери сам: как мы сделали хранилище Amazon-style для начинающих хостеров. If you are still puzzled, I would definitely suggest you taking a look at them. There are multiple reasons why the testing process of PCS may be interesting, but the main one is, undoubtedly, the nature of the products itself. It is complex, consisting of many components and developed by several independent teams.

If it seems interesting to you, warm welcome to the next section. Parallels Cloud Server is a bare metal product, meaning that it is installed on bare hardware, eliminating the need to any intermediate software. In the heart of PCS lays RHEL-based Linux distributive, more precisely Cloud Linux, together with integrated components: patched Linux core, Parallels hypervisor, Parallels Cloud Storage components, customized installer based on Anaconda, user friendly panel to manage containers and virtual machines (Parallels Virtual Automation) and dozens of command line tools to manage and monitor PCS. Testing process covers every single component mentioned above.

At the moment about 98% of PCS functionality is tested by auto tests. The amount of tests we use has grown dramatically from 180 to 600 distinct titles between PCS 6.0 and its predecessor, PCS 4.0. Peculiar traits that are now present in the testing process owe much to the nature of the product: we run tests only on hardware nodes, physical machines, and they are different from any Selenium testing engines, especially in their complexity, sophisticated configuration and overall duration (from 1 hour to 1 week). To let you see the whole picture, I am giving some real figures. For PCS 6.0 RTM we’ve used 572 unique test titles and made 2959 runs during 2.5 month, what equals ~ 294 computer/days. Whereas one of our latest updates was covered by 260 unique test titles and 4800 runs.

Nevertheless, the situation was different in the past. No later than several years ago we didn’t have so many auto tests and didn’t possess so much hardware to run them. We used to install software for every single HW node manually, manually started auto tests and manually filed bugs to our bug tracking system. Some time passed and the amount of HW nodes in tests grew from 20 to a hundred, number of tests to run on every single build increased from 180 to 600. It all influenced the testing system and that’s why we’ve come the testing system we use now. 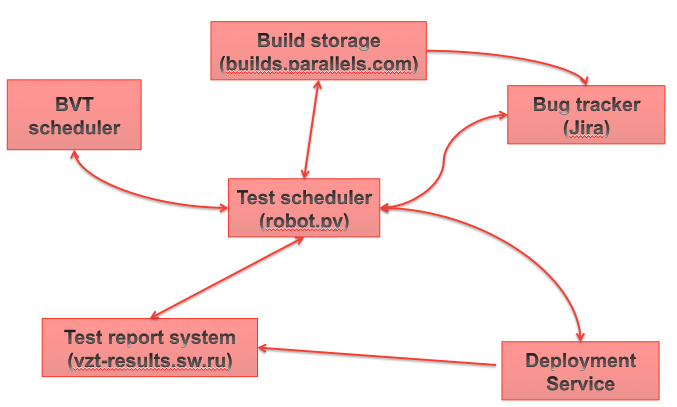 When a fresh Parallels Cloud Server build is compiled according to the timetable, builds portal receives the notification about the successful build procedure and displays new build details. After that, BVT (Basic Validation Test) is started automatically. The test itself contains of two main parts – PCS validation (containers and virtual machines testing) and Parallels Cloud Storage validation (same tests, but using Cloud Storage as the main storage instead of local hard drive). If BVT passes, notification about successful validation is sent to the builds portal and current build is marked as valid. Finally, test scheduler starts all planned test titles against current product build. If BVT fails, no additional tests are run by test scheduler until new build with fixed problem appears on builds portal.

Test scheduler is one of the main parts of our automatic test process. And if sometimes it is possible to satisfy ones needs with out-of-box working solutions for continuous integration tasks (like Jenkins used by Yandex), it is not possible is our case, because we have to implement custom logic for test planning.

Using information from other internal systems, test scheduler is able to perform the following tasks

Before testing each new product update or release we compose the list of test titles, test plan, to be run. Each test plan consists of test titles, shortly defining test configuration that is needed (prerequisites for HW nodes to run the test, test parameters, etc., …).

Each test title has its own corresponding test job that contains information about needed testing environment and additional test options, such as amount of involved HW nodes, software/hardware HW nodes prerequisites (HW node, vm or container needed, OS and product versions, etc, …). From time to time Task scheduler (robot) spools test plan and continuously takes the next test title from the list, then firstly tries to queue it for execution if title is not blocked by any product or test bugs, secondly looks for available HW nodes satisfying all test job requirements. If such HW nodes are found, robot uses deployment system to initiate installation activities on HW node: OS deployment, product installation and upon successful completion, test title run. 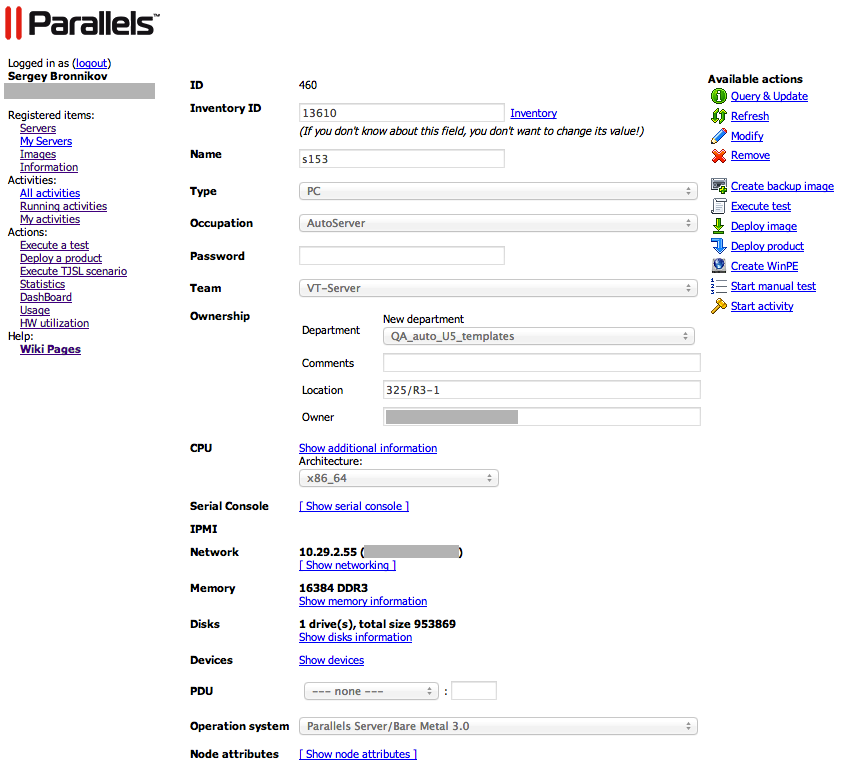 While test is run on a HW node, it is marked as busy with corresponding activity on deployment system portal and is not used by other tests. 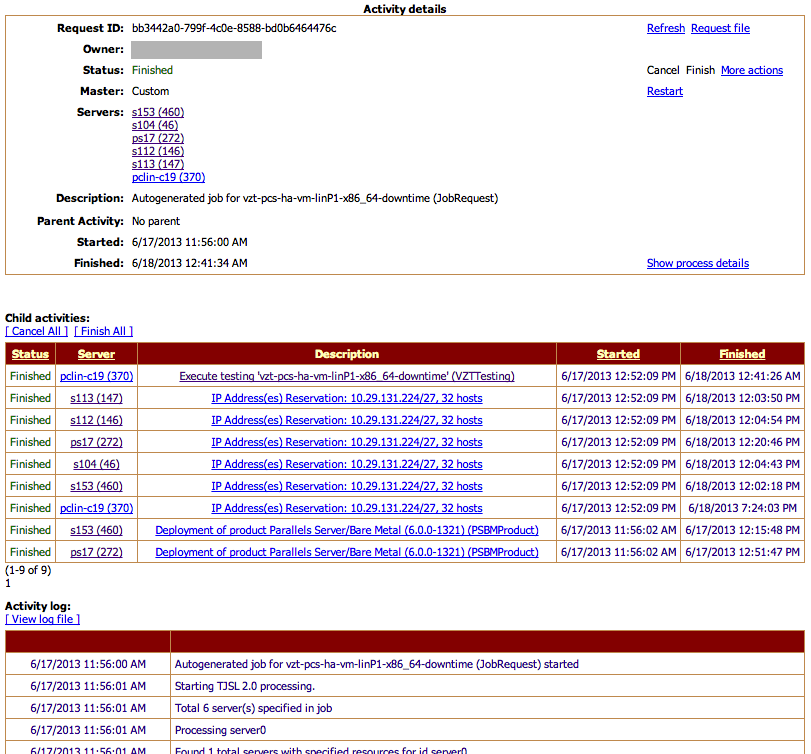 The screenshot above illustrates that some test run on five HW nodes, used pclin-c19 node a client (was start from the client, not from nodes themselves). Parallels Cloud Server was installed on two HW nodes and IP pool reservation was performed to provide for the future needs of virtual machines and containers.

These nodes have QA investigation activity on deployment system and are eliminated from other tests until they are released manually.

Our engineers in test and developers always have a possibility to investigate the bug in the original environment. If the bug is trivial and nodes are not needed, they are released either from Jira assigned nodes field or by finishing the activity on deployment system. 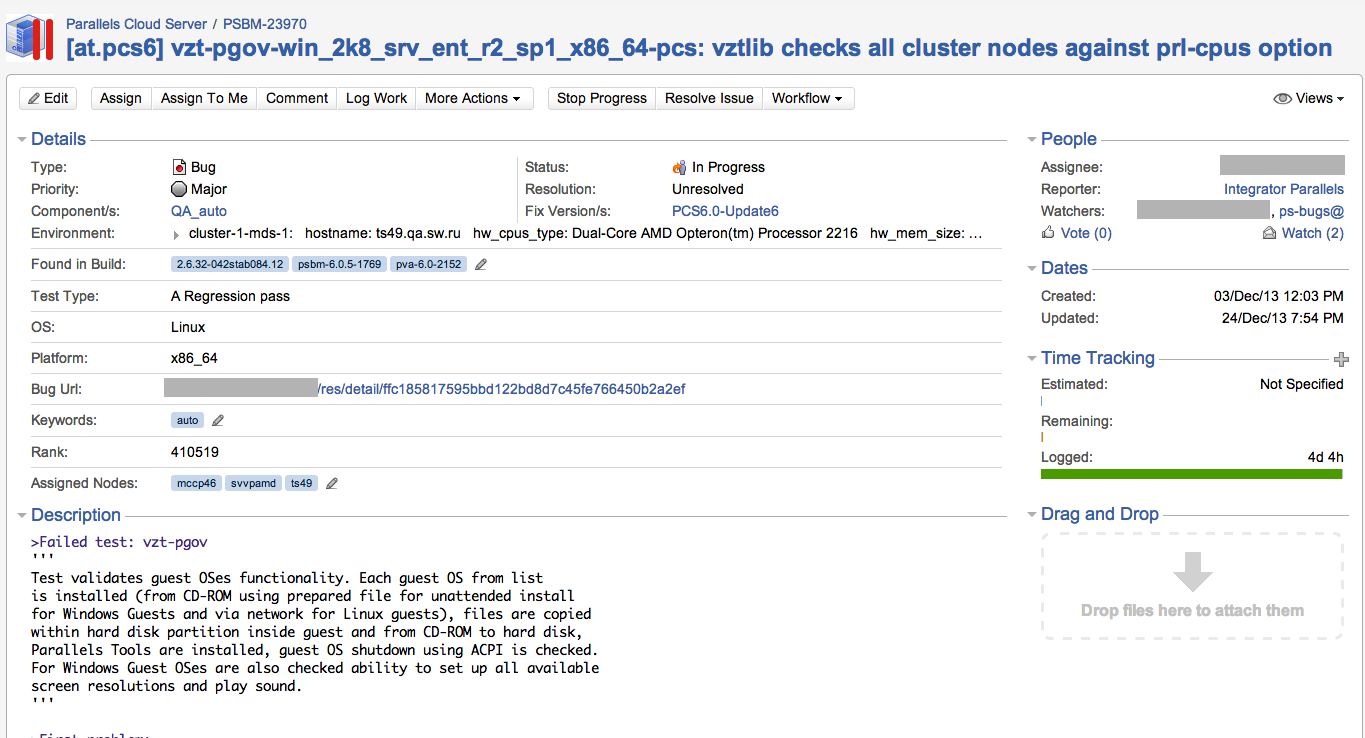 We also use the graph below to see the dynamics of testing in time and know what our servers are busy with.

As I’ve already written, task scheduler is able to validate product bugs automatically. How does this work you would ask? Every product commit contains an obligatory comment, referring Jira issue reference. After the product build event, build version field is updated in field “Fixed in build” for issues mentioned as closed for corresponding change log.

Robot considers this information and reruns tests only for those builds that have a fix. If rerun succeeds, robot marks Jira bug as validated on new builds number and provides a link new results.

But automation is not the answer to all our needs. Unfortunately or gladly, ☺ we are still unable to make the process of testing fully automated. Such an intricate production-level system of auto testing requires a human attention, of a single engineer in test in our case, to take care of test runs, analyze their results, add new test configurations, create test plans with needed titles to accept the product change, develop test scheduler logic and provide HW node support and maintenance (sometimes they break down, sometimes require new hardware, such as SSD or USB bulk device emulator device, etc).

And what are your news in automatic testing? :)

Thanks to Galina Polyakova for translation of original article.